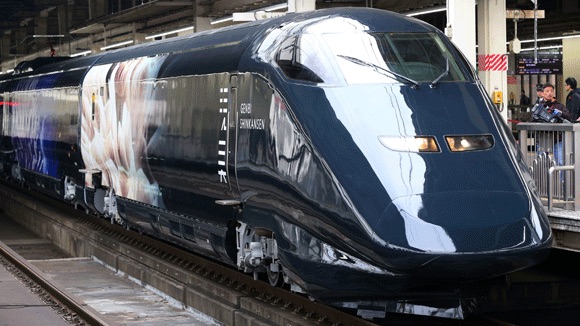 Luxurious sleeper cars, dining cars serving fancy meals and trains with hot springs. In Japan it’s not enough for a train to get you from A to B: railway operators now want to sell the experience of the train ride itself.

On 29 April, East Japan Railway will launch the Genbi Shinkansen, the world’s first high-speed train that doubles as a contemporary-art gallery. The train – an older model with a revamp that cost ¥500m (€4m) – will make the 50-minute trip between Niigata and Echigo Yuzawa stations in Niigata prefecture, northern Japan, 24 times from late April until June; the schedule after that has yet to be determined. Inside the train is the work of six artists – all but one Japanese – and the interior, designed by Tokyo-based Transit General Office, looks nothing like the standard Shinkansen. It features wainscoting, armchairs and a wood-panelled café serving dessert and coffee from producers in Niigata.