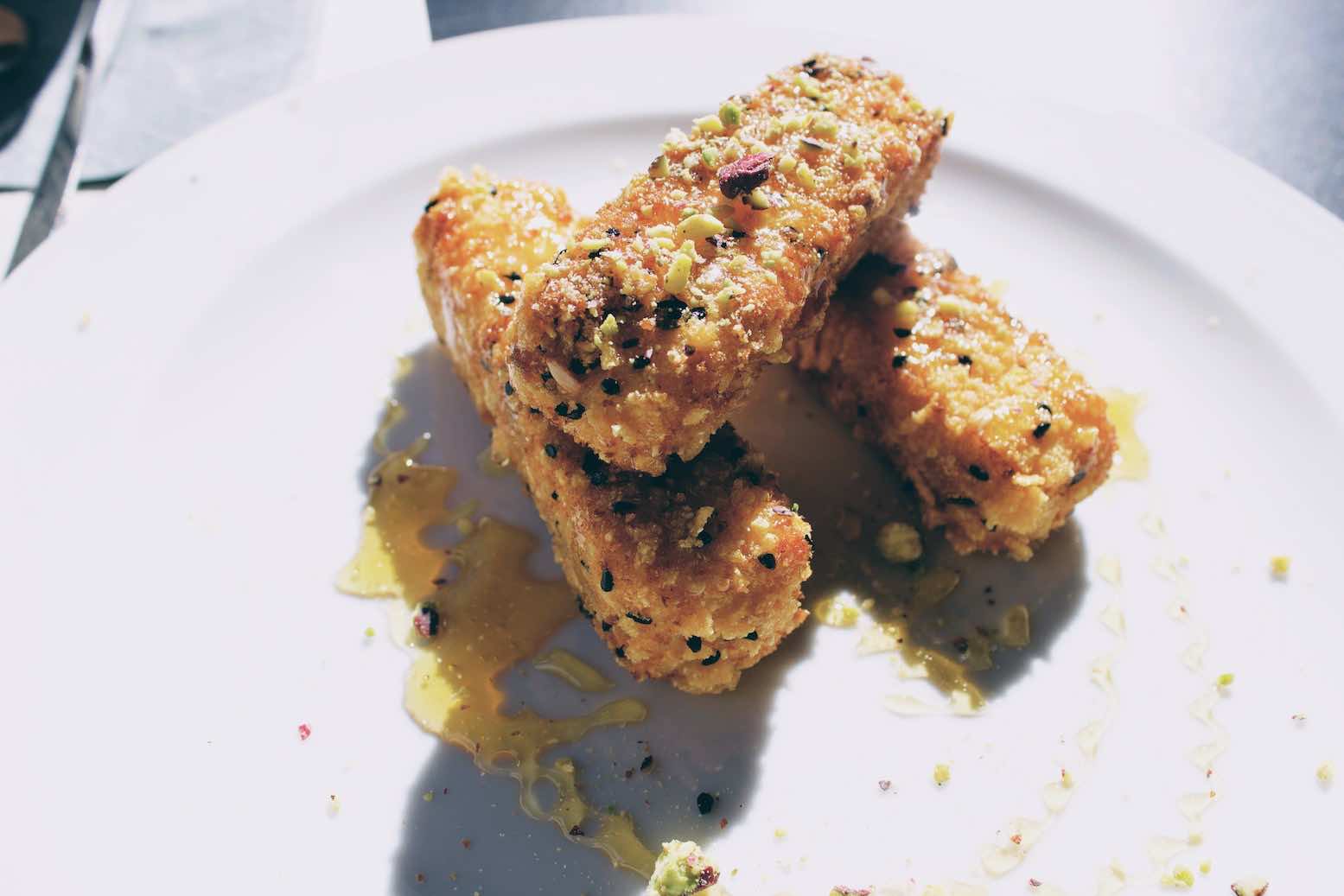 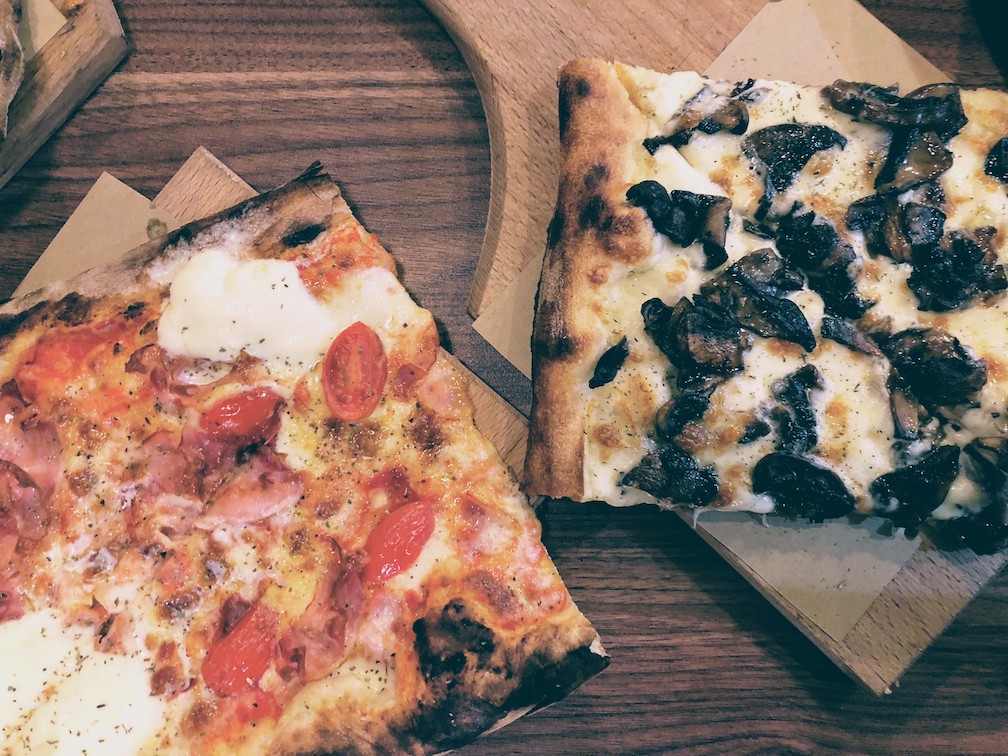 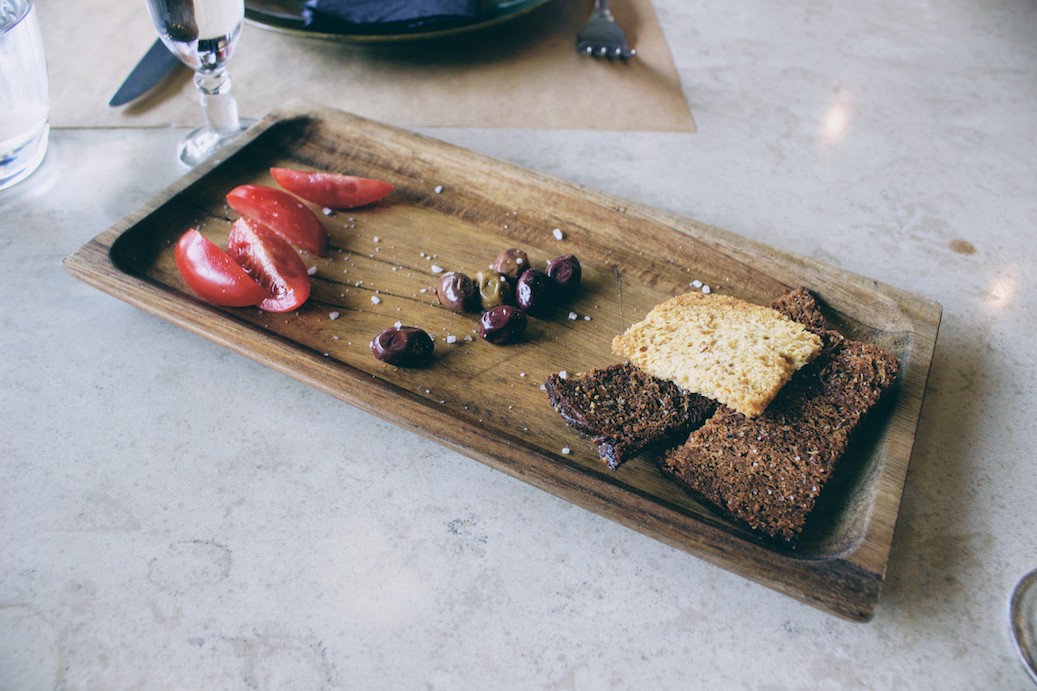 At Charoúpi, the kitchen is upstairs, prompting me to say with each new dish that good things do indeed come from above. This newer restaurant is located on the outskirts of the Ladadika neighbourhood, down the street from The Blue Cup and in a glass-walled storefront. The inside decor matches this curb appeal with simple decor: wooden and matte black pipe chairs, stone-topped tables, coordinated yet mismatched ceramic plates.

The food is equally modern, though still recalls traditional dishes of Crete. To start, a salad of boiled greens topped with chickpeas and pearl onions, a few chunks of beet and a scoop of soft white cheese, all atop a bed of breadcrumbs. A bite of vinegar kept it bright, and the breadcrumbs were crisp against the soft of the boiled greens; however, they began to lose texture as they sat in the oil and vinegar collecting in the bottom of the plate.

A Sfakian pie, next, was made not with white flour, but with carob flour and was topped with black and white sesame seeds and carob honey. This dish, then, is somewhat an embodiment of the text on the wall of the restaurant, the only adornment on the walls save a shelf of pottery: the carob is a symbol for Crete, holds a piece of the island’s eating habits, but also part of its history.

Service at Charoúpi is unobtrusive to the dining experience, and for the most part, dishes are brought one at a time. Next was an omelette – it was a Sunday afternoon, after all, the time for brunch. Standing up in rolls on the plate, the omelette comes stuffed with spinach, tomato, and mizithra cheese, but cooked inside the eggs are pieces of sausage. It’s fluffy and yellow with frizzled, almost fried edges. Finally, a dish of meatballs, each one stuffed with a small piece of graviera cheese, served on a small Sfakian pie – though unstuffed – with yogurt and a tomato sauce.

Though a bit more expensive, the food is worth the prices. It is of high quality, and it has obviously been prepared with attention to detail. The wine list, too, is curated, and the wine service is accommodating to personal tastes. On an early Sunday afternoon, the restaurant was almost empty, but it is recommended to have a reservation, as most tables were saved for later parties.

The meal closed with a complimentary dessert, as is the tradition in Thessaloniki, and here, the same level of quality and care is afforded. An ice cream topped with toasted pieces of Sfakian pie, walnuts, and carob honey – gifts from above, like manna from heaven.